Working papers by our students

The working papers presented below showcase the research led by our students, with the support of the RESTEP. Each approches European politics from a novel angle, and proves just how much potential this area of research contains.

We will publish ten working papers in the course of January and February 2021, one for each University that is part of our network.

Agonistic Democracy and the Hard Eurosceptics: Towards a European Democracy? 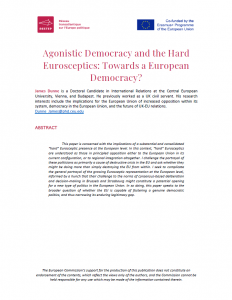 James Dunne explores the issues related to European democracy, the arguments raised against its system and the implications brought about by the presence of Eurosceptic parties at the supranational level.

In this article, James Dunne focuses on how Eurosceptic parties can potentially improve the relationship between the European Union and its citizens. To this end, he considers the concept of democracy in its contestational dimension, insofar as it should allow for productive public debate. Through his observations, he argues that the rise of a bloc critical of the EU does not constitute a threat to its existence, but on the contrary helps to reduce its democratic deficit by increasing its visibility to the public.

Tweeting about Brussels? European governance in the communications of national parties and leaders 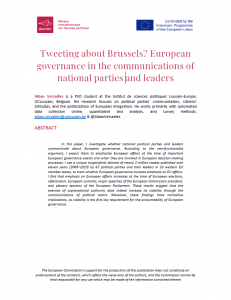 Alban Versailles studies the communications of political parties as well as citizens’ attitudes about European integration. His research focuses on the processes of politicization of Europe and their implications.

In this working paper, he analyses whether national political parties communicate publicly about Europe at key moments in the European decision-making process. Using an original database of nearly 2 million messages published on Twitter between 2009 and 2019, he shows that parties do indeed talk more about Europe during the European elections, the UK referendum, European summits, speeches of the Commission President, and plenary sessions of the European Parliament. 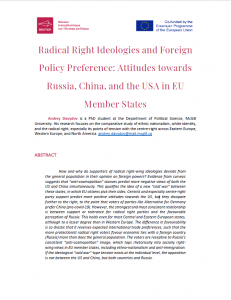 Andrey Davydov’s research focuses on the comparative study of ethnic nationalism, white identity and the radical right, particularly its points of tension with the centre-right in Eastern Europe, Western Europe and North America.

In this article, Andrey focuses on the attitudes expressed by European far-right supporters towards certain foreign powers. Through his research, he finds similarities and differences between respondents according to their country of origin: while all seem to view Russia positively, opinions differ and change over time with regard to China and the United States. Thus, Andrey corrects the literature on the subject, which argues that economic issues would have replaced ideological ones on the international scene. 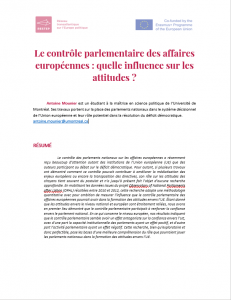 Antoine Mounier is a master’s student in political science at Université de Montréal. His work focuses on the place of national parliaments in the decision-making system of the European Union and their potential role in resolving the democratic deficit.

Here, Antoine studies the control of national parliaments over European affairs and their impact on attitudes towards the EU. Using regression models, he quantifies citizens’ trust and its evolution in tandem with the control exercised by their respective governments. Through his research, Antoine detects the place the EU occupies in public opinion as it becomes more politicized and as issues of democratic legitimacy develop regarding it. 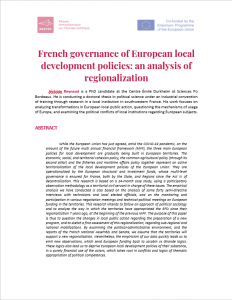 For his PhD, Jérémie Reynaud focuses his work on the analysis of the transformations of European local public action, the questioning of the mechanisms of use of Europe and the examination of political conflicts between local institutions on European issues.

With this working paper, Jérémie focuses on the French case in this regard. Through a participatory observation undertaken as a territorial civil servant, he seeks to identify how local governments in France have appropriated the European Fund for Strategic Investments (EFSI) since their regionalization 7 years ago. At the same time, he identifies the conflicts resulting from this process between the various levels of government. 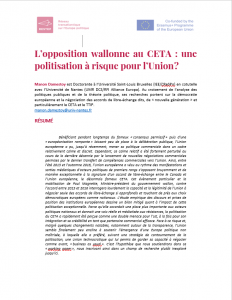 Manon Damestoy’s research takes place at the crossroads between public policy analysis and political theory. She is interested in European democracy and the negotiations of the so-called “new generation” free trade agreements, particularly the CETA and TTIP.

Here, Manon examines the controversy surrounding the CETA, a free trade agreement between Canada and the European Union that was strongly criticized by several actors at the time of its adoption. Through a content analysis of speeches as well as the positions adopted by the European institutions, she identifies the consequences of this issue on the politicization of Europe, as well as the questions of legitimacy brought up in its regard.

Emotional Politicisation of the European Union: Towards a New Framework of Analysis 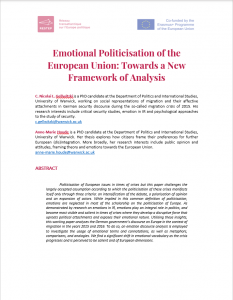 By Nicolai Gellwitzki and Anne-Marie Houde (University of Warwick)

Nicolai Gellwitzki and Anne-Marie Houde study the role of emotions in international relations, an often-neglected topic of research in political science literature. The authors are interested in how emotions contribute to the politicisation of European issues, particularly in time of crises.

In this working paper, Nicolai and Anne-Marie carry a case study on the German government’s response to the migrant crisis of 2015 in order to showcase the importance of emotions in politics. Through a discourse analysis, they find that German actors’ statements use more emotional rhetoric and appeal to a common European identity as this specific issue becomes politicised. Nicolai and Anne-Marie thus conclude that emotions play a fundamental part in our understanding of European affairs, especially in time of crisis where they become more salient and polarised.

Attribution of Responsibility for Economic Policy Issues in the Mainstream Media, Before (2002–2009) and After (2011–2016) the Great Recession 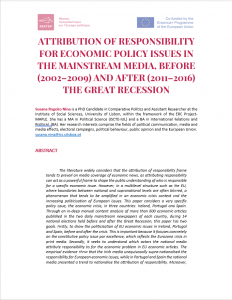 Susana Rogeiro Nina studies the media coverage provided by national newspapers on economic affairs. More specifically, she seeks to identify which actors the media tend to assign responsibility in times of economic crisis. Her work carries important ramifications as the press plays a major role in shaping public opinion and influencing how citizens judge the performance of political institutions.

Susana conducts an extensive content study covering 600 press articles published by six newspapers in three European countries: Italy, Portugal and Spain. Through her analysis, she identifies the various ways, sometimes divergent and other times convergent, in which the respective media in these states cover economic news before and after the 2008 global financial crisis.

Extending the Kin-state Policies via the European Parliament

By Mate Subašić (University of Liverpool) 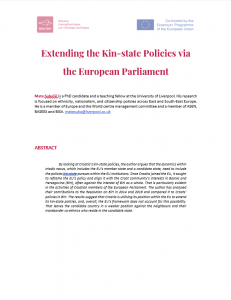 Mate Subašić’s research focuses on issues related to ethnicity and national identity, particularly as they relate to transnational communities. He focuses on states located in Eastern and Southeastern Europe and the way in which their policies in this regard are expressed in the European Parliament.

In this working paper, Mate looks at the case of Croatia and its kin-state policies aimed at the Croatian community in Bosnia-Herzegovina, as the latter seeks to join the European Union. By studying official documents, interviews with government officials and the work of members of the European Parliament, he creates a three-stage history of Croatia’s campaign to influence European policies on ethnic minority rights. Through his analysis, Mate demonstrates that the European legal framework does not take into account the concept of kin-state, allowing Croatia to expand its policies in this area. 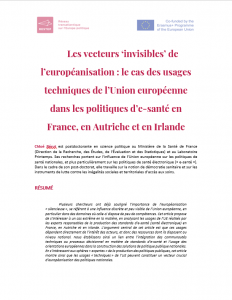 Chloé Bérut studies the influence of the European Union on national health policies, and more specifically on electronic health (“e-health”) policies. Her research deals with topics relating to European integration as well as the influence of “soft law” on member states.

In this working paper, Chloé demonstrates how the use of European standards by experts in the development of national e-health policies contributes to the integration of their respective countries. Her analysis looks at practices in France, Ireland and Austria, three members of the European Union that diverge in the resources at their disposal and the interest of the actors in using European-made instruments. Chloé’s approach reveals an important mechanism of integration; although it seems to be limited to a very specific technical field, it nevertheless has fundamental consequences on the design of national policies in the countries in question.